After a week of declining relays around Thanksgiving (who knew that people don’t play with their dapps all day while hanging out with family?), the network was chugging like a freight train this week, pushing out 834MM relays and minting 7.4MM $POKT. Perennial top placers Harmony, Eth, and Fuse were the top performing chains, but an upsurge in Dark Forest traffic led to a noticeable growth of xDAI relays. November closed out strong with over 3.7BN relays served. 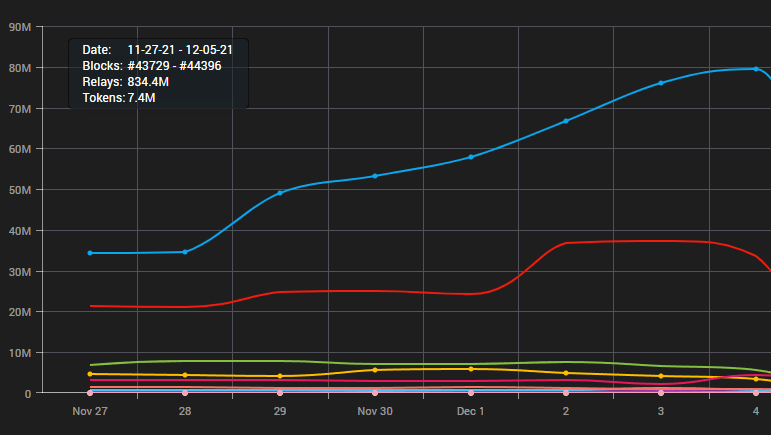 There were a number of exciting announcements that came out of dcentralcon in Miami this week, including a snapshot tool for noderunners that will improve block syncing time, and an announcement from Michael Arrington about the Algorand / Pocket Network partnership.

The Pocket train is chugging. If you're not on board, you're going to get left behind. @Algorand knows what's up. https://t.co/B2WaxZr5vw

Staking is still the primary goal for new Pocket acquisitions, with the staked vs. unstaked numbers on a trajectory to flip in the next 3-4 months if staking continues at this rate. There are currently 307MM pokt staked per C0d3r.org: 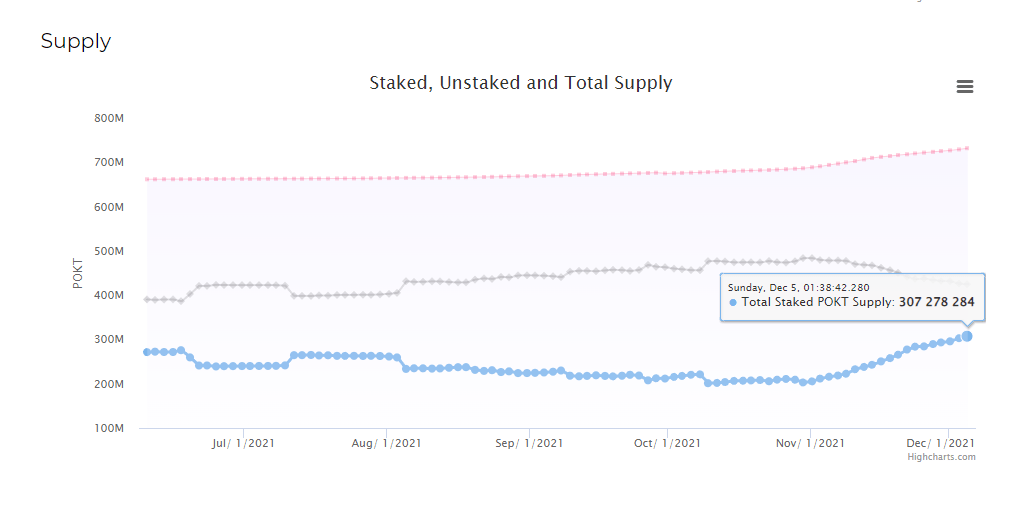 Modeling growth for the network becomes really interesting when you factor in the monetary phases of Pocket’s tokenomics, in particular, the equilibrium trigger to the maturity phase:

If both sides of the marketplace (Applications and Service Nodes) grow, there will be continuous demand for Relays resulting in Service Nodes spinning up new Pocket nodes to increase the number of Relays they can service.

Early Applications will receive more infrastructure throughput as the network grows providing an incentive to early adopters of the network. When both the percentage of POKT staked and Service Node margins begin reaching their equilibrium, the protocol will have entered its maturity phase.

Given the steadily increasing network throughput, it may be some time before we see that equilibrium get reached and the beginning of the maturity phase, indicating a continued strong upside for Pocket over the long term.

One of the biggest things to happen in the community over the last couple of weeks was the implementation of the Pokt Pool, a fractional staking noderunner setup piloted by community member Joey Rosati. Fractional staking allows pokt holders with less than the 15K required to run a full node to pool their pokt with others and stake for rewards. In the last couple of weeks. the pool has built up to 17 nodes staked, and will get to 22 nodes this week with tranche #5. Pool members have the option to withdraw rewards with a scheduled sweep, or leave their rewards in to compound their position in the pool. Unsurprisingly, most are opting for the latter. 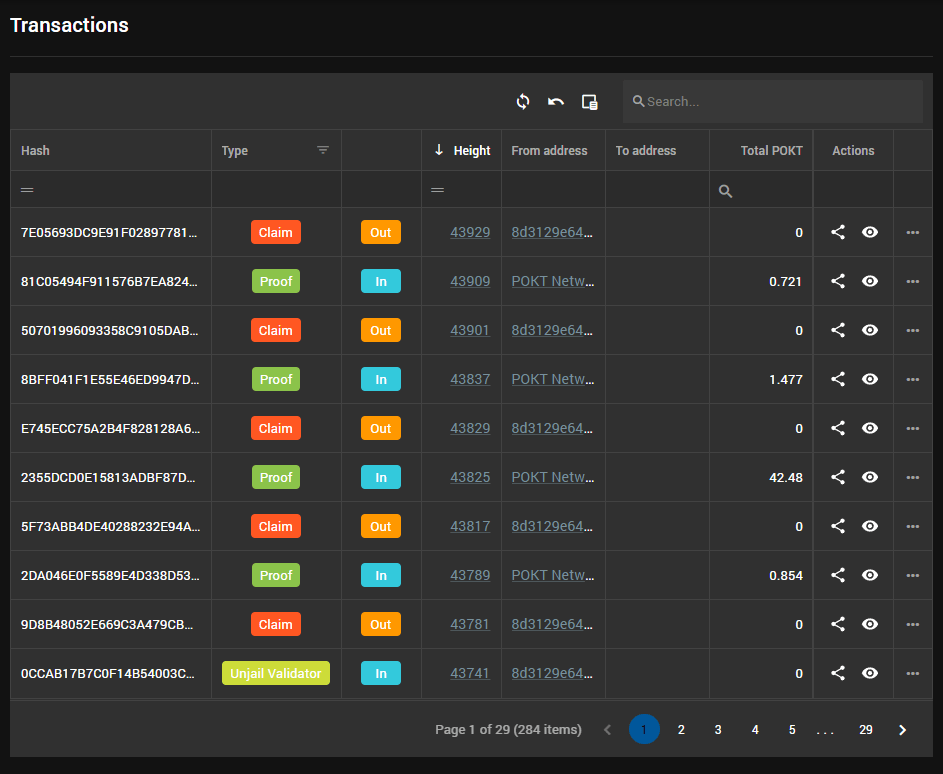 He’s also added a caching system to improve load times, and a number of other UI enhancements. With the rapid iterations occurring on the site, Poktscan is quickly becoming a go-to for detailed node management data.

There was a robust conversation around the proposed Universal Contributor Income model outlined in PEP-16. Of particular interest to the DAO and the supporting community is how various contributions are weighted when using systems like Coordinapes to distribute rewards for meaningful content work by the community. Patrick made a point to emphasize that the values at Pocket’s core need to drive consideration of the value of contributions, but Dermot’s point here really drove me to support the proposal as is:

Community members directly recognising each other’s contributions should lead to a more cohesive and productive community. The anecdotal evidence from the Yearn, Gitcoin and Bankless DAO communities would suggest that this is true.

Boots on the ground will always be much better at calibrating in real-time the activities that are most valuable to the community. I’m really excited by more localised decision making in Pocket. The alternative is a static system of categories and multipliers that may have to be updated and voted on every month or two to stay relevant. It’s scary to give up control, but we can only see the true power of the DAO once we do so.

I encourage everyone to read the entire conversation so you’re up to speed on upcoming opportunities for the folks in our community who contribute the most.

There’s been a ton of talk around the upcoming launch of the new and improved Pocket web wallet, and the team this last week has shared some screenshots that are absolutely gorgeous: 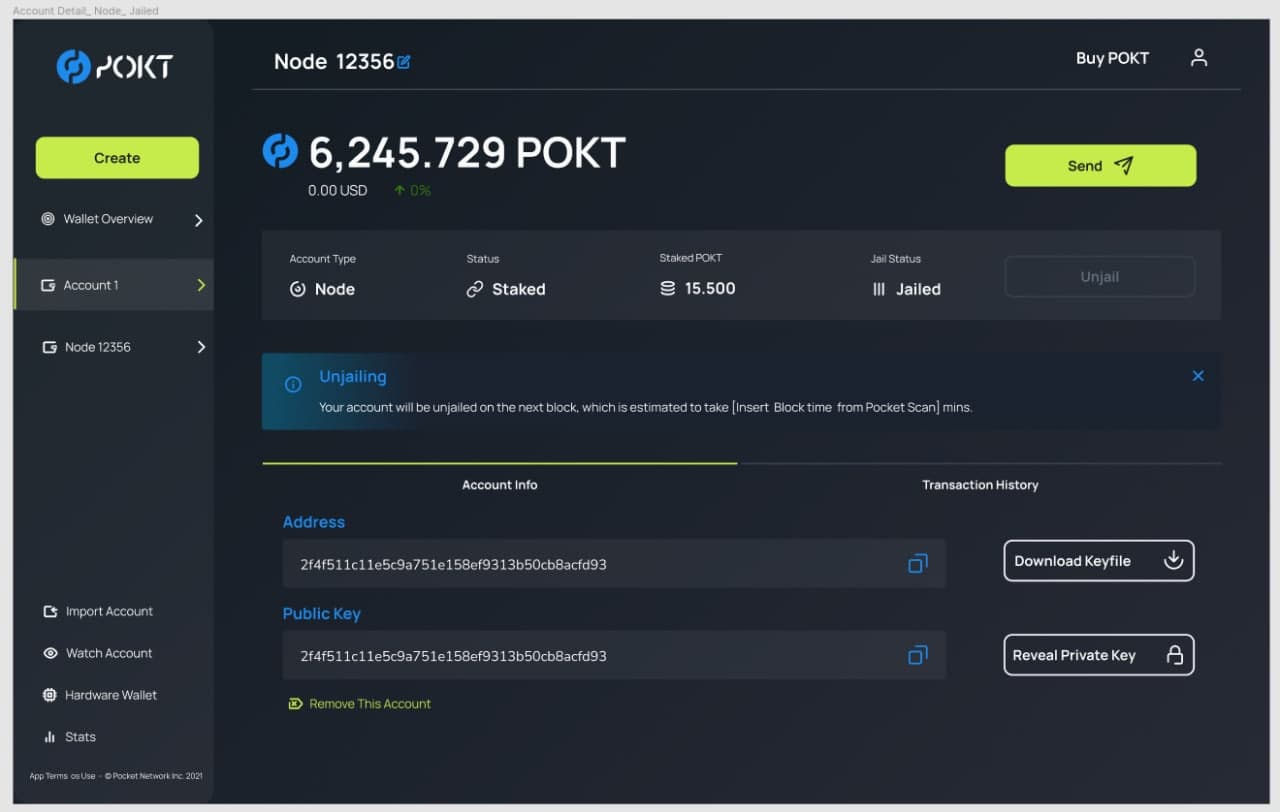 Of particular note to the sharp eyed observer is what appears to be multi-wallet support, which will be a welcome addition to those of us commonly managing transactions from multiple wallets (like a certain octopod who runs airdrops, for instance). I’ll be writing more about it as the details come out.

@ethen_ and I ran another #POKTSTORM giveaway this week, handing out 400 pokt each to 10 randomly selected wallets. The rewards were doubled this week thanks to anonymous contributions to our public Donation Wallet.

Our ten recipients were predictably thrilled to get their hands on some pokt, and looking forward to staking:

Thanks so much! 1 step closer to getting a full node running 🙂

Because giveaway recipients have been asking about staking opportunities while holding less than the required stake amount, we’ll be partnering up with the Pokt Pool in future giveaways to give recipients the ability to immediately stake their airdrop on a fractional pool. Stay tuned for this week’s #POKTSTORM details by following me on Twitter.

The interconnected nature of web3 projects was heavily on my mind this week:

I've been thinking about this tweet a lot this week. One of the strengths of the web3 industry is the interoperability and interconnectedness of the various providers; and the relationships among them. The #metadao, if you will. 1/ https://t.co/FT3YsDrudb

I’ve only been actively involved in DAO activities for about three months, and I’m 100% a convert. The decentralized organization model blends the flexibility of remote work with the volunteerist model of community activism, with the token itself being a decentralized incentive for all participants regardless of the level of contribution. And while I expect a certain amount of tribalism in communities, the cross-community cooperation and support has been a joy to behold.

I’ve heard from community members that the high energy positivity and “all hands in” ethos of the Pocket community is somewhat rare, which makes me proud of our people. Apparently a number of communities are, to quote my man Ilz, “toxic af”. That’s a real missed opportunity. When you see how much gets accomplished by a community that believes in itself, with a mission to help everyone who joins, it’s powerful, and inspiring.

When you expand that energy out into other complementary communities, the effect is multiplied. When I’m engaging with folks from other projects on our community Discord, their presence there builds huge loyalty to their product as part of my stack, and the collaborative work on both products from both sides yields bigger, better results faster.

There’s a Japanese concept called “keiretsu” in which smaller businesses stake in each other and share resources in order to compete against larger organizations, and to reduce the impact of single unit failures. The “metadao” model of cross-product cooperation shares many of the same aspects; with Pocket + Storj + all other complementary products, you get something which is much bigger than the whole of its parts. It’s not just a well defined stack for dapp development, it’s a broad swath of people like you and me pulling for similar outcomes which benefit us all.

If that doesn’t excite you, you probably don’t belong in the web3 space.