The wPOKT team announced this week that primary development of the wPOKT bridge has been completed, and is now in QA. The team is currently evaluating blockchain auditing firms to run aggressive security testing ahead of the planned LBP launch. Along the way, they’re inviting the community to participate in the beta testing of the wPOKT farming app. Fill out the form below to request access to the beta testing program:

Given the progress, the team appears to be right on track for the revised launch targets, but we’ll keep an eye on the wPOKT dev log for detailed updates.

In the Poktopus Den this week, we’ve added a pricing bot courtesy of the fine folks at Jamso OTC. Using the command:

…you can summon an aggregate view of the 1, 3, 7, and 30 day VWAP of $POKT, along with a link to the community vetted OTC markets: 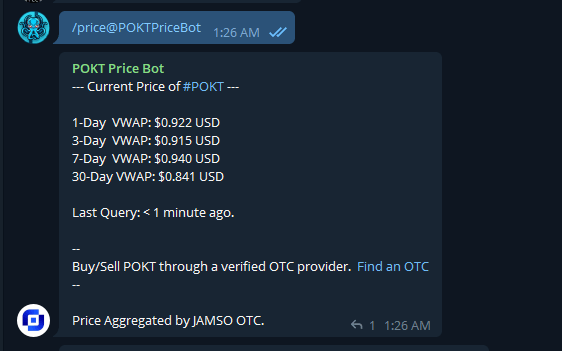 Pocket’s TVL continues to climb aggressively, with 337MM POKT staked against 418MM unstaked, and noderunners across the poktoverse are watching for a flippening event in the next couple of months. The biggest obstacle to faster network growth appears to be noderunner supply, with providers backed up with new node requests and 5 node minimums being raised to 10-20 node minimums in some cases. Many POKT holders who have a full stake’s worth have been looking instead at poktpool, POKT’s first fractional node staking service started by community member Joey Rosati and assisted by your favorite octopod. The pool has no minimum commitment, allows for compounding rewards, and donates 5% of rewards to the #POKTSTORM community airdrops.

Pocket’s Monthly Community Meetup call this last Friday was jam packed with far too much to go over piece by piece, so if you missed it, just stop what you’re doing and watch the replay:

Among the info drops was the introduction of PUP-11, the WAGMI Inflation proposal:

I’d like to encourage sustainable inflation that protects rewards against a decrease in relays and sensibly reduces rewards as Pocket Network grows. The proposal would implement an annual inflation target set by the Foundation Directors based on their goals, which would provide a predictable amount of inflation for users of Pocket Network.

The Poktopus will be the first to admit he’s not an economist, and this proposal had me digging deep into Google for inflation models and breathless analysis about “The Coinbase Effect”. However, I think it’s one of the most impactful proposals we’ve seen in the DAO for as long as I’ve been a member, and I encourage everyone to read through it and get a sense of what’s being proposed. And hopefully some of you actually are economists, and can help explain the modeled impacts to me.

After the successful rollout of the PIP-7 Validator / Servicer split, noderunners everywhere have reported lower CPU usage and generally better performance. Paired with the Cherry Picker API updates Pocket Lead Blockchain Developer Andrew Nguyen spoke about in a previous Noderunner Office Hours call, most nodes have seen improvements in sessions relayed. PUP-10: Increase SessionNodeCount to 24, which is up for voting now, will further increase equitable distribution of rewards by allowing 24 nodes to participate in each relay session instead of 5, which should reduce total reward size, but generate rewards more frequently.

Despite Mainnet launch over a year ago and nearly a $1 billion MC, @pocketnetwork continues to fly under the radar for many.

What is Pocket? How is it one of the most asymmetric bets that no one talks about?

Among the tweets in the thread is this meme, which I’ll be promptly stealing: 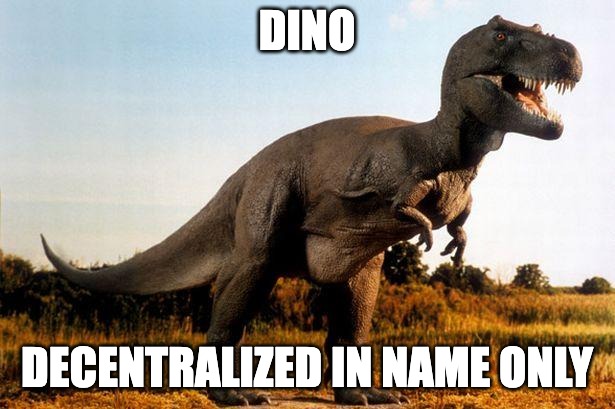 Nigel and I introduced “Poktowinks” this week, which are quick hit $POKT tips for top tier memery and other short form content we see on Twitter. We’ll be reviewing our favorites on Fridays and tipping out between 25-100 pokt for each. Want to get our attention with your Pocket related shitposting? Tag @thepoktopus and @nigeldollentas with the hashtag #poktowink.

05:3 PoktoClaus Is Coming To Town

Christmas is at the end of this week, and I think we should do something awesome for it. So, for this week’s giveaway, we’re going to run it a little longer, and get a single lucky wallet holder staked in the rewards pool to the tune of 5K POKT. The selection will occur at noon EDT on Friday the 24th, so if you don’t have notifications turned on for @thepoktopus, I suggest you do so now, and keep an eye out for the announcement.

Last week’s giveaway saw three lucky wallets get staked for 2K each, and one particular recipient is doing some baking in response:

Woop woop ! Thanks for the giveaway and opportunity, I have to make a Poktopus ft $POKT cake this weekend I guess🤩 https://t.co/61AGXBpP3M

So far, #POKTSTORM giveaways have airdropped an astonishing 18K POKT to new community members around the world, entirely funded by community donations. Make sure you jump in this week for your chance to catch some rain, and stay tuned for 5 more giveaways before the launch of wPOKT.

When I wrote about the AWS outage last week, I have to say I was a little grateful for the timing. A massive centralized service outage, during which the Pocket Network was entirely unaffected, and handled spillover from affected services, was a pretty good opportunity to dig the needle in a little bit to the use of centralized web2 providers behind web3 services.

And then it happened again.

And then it happened to Azure.

One would think after the six hour outage at Infura last year took down defi apps everywhere that Web3 product owners would be eager to dogfood decentralized solutions, and yet every single time a major provider goes out, a number of Web3 services are adversely affected.

I spoke at length about this last week, so I’m not going to continue to harp on it, but much like that DINO meme above, Decentralized In Name Only dapps are going to go the way of the dinosaurs if they don’t don’t start taking advantage of the reliability of true decentralization. In the Web3 community, we’re watching.