It’s common sense that relays drop during a hard bear market, as people stop checking their wallets daily and shift to copium tweeting instead. Pocket was affected by this, dropping nearly 100MM in daily relay totals during the worst of the downturn, but as the markets stabilized (and cross your fingers, even began to creep up a bit), so did relays, jumping up to a new all time high of around 380MM before settling back down around the 325MM range.

The markets, however, have remained stagnant, with $POKT prices bouncing between 1.29-1.45 depending on the time of day. There seems to be a hard wall of resistance that won’t really break through until demand outstrips the minimal supply currently running through exchanges, averaging a paltry 10MM or so in volume daily.

The $POKT getting acquired still demonstrates the strong demand or nodes, however, with nearly 500MM of the roughly 650MM circulating supply now staked on nodes: 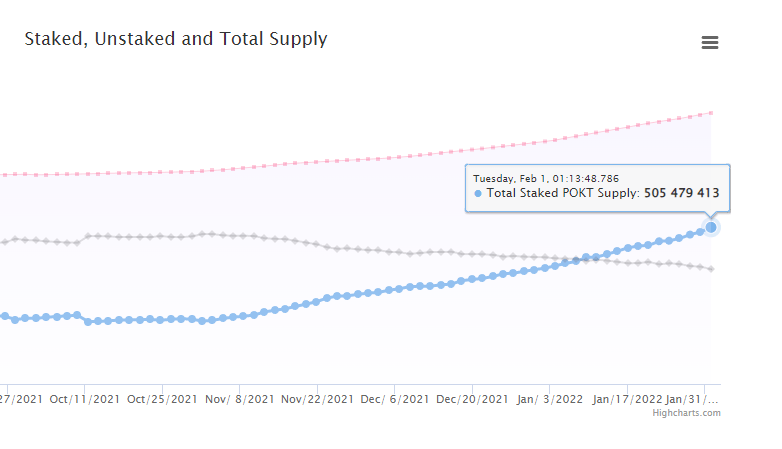 Given the constantly reducing supply out in the marketplace at large, one would expect a commensurate rise in price, but the market confidence starting to be shown in the rising Bitcoin price doesn’t seem to have made its way into the Pocket markets yet. I expect it’s just a matter of time. In the meantime, buyers are taking advantage of the discount pricing to push forward on node building strategy, and the node unstaking count shown at C0der.org has dropped from a record high of around 990 down to 960 as stakers settle in the for the long haul.

At Friday’s monthly meetup call, Pocket rolled out their v1.0 spec reveal with a huge vision for the future of the protocol. As usual, I was livetweeting the call, and the Pocket knocked our socks off with some significant changes proposed for the protocol, one of the biggest being a complete rework of the rewards system around quality of service. Nodes will be scored based on QoS metrics, and be constantly paid for maintaining those metrics instead of purely on the volume of relays being served up by the network.

This looks to guarantee both a more stable and fairly distributed rewards system, and high QoS through the network for the most important aspect of Pocket Network: its customers. This is exactly the kind of thinking we look to see from Pocket leadership, and it bodes well for continued expansion into other networks.

Over in the governance forum, the debate around PUP-12, a stopgap measure for inflation control appears to be wrapping up and heading for a vote. And while the proposal has prompted some contentious debate, a number of revisions based on community feedback seems to have resulted in enough support that it seems likely to pass. In a nutshell, the proposal will allow the DAO to begin stepping down the RelaysToTokensMultiplier value about 60% over a period of about six months, and perhaps in conjunction with relay targets, and increasing the DAOAllocation value to double its current value of 10%.

Pocket CEO Michael O’Rourke has spoken passionately about the need to get inflation under control before the numbers get too big to be unmanageable:

We have been on an exponential growth curve in relays over the last 7 months after a relatively flat year. We continue to be laser focused on this. We’re nearly at 1B POKT in circulation. When we hit 1B relays and if rewards stay is as is, we’ll have 2B POKT in circulation within 100 days. Even if growth slows, when we hit 2B relays we’d be adding another billion of POKT in circulation every 50 days assuming all stays the same.

Exponential numbers can get large, fast. The train can quickly go off the tracks here, creating a real supply shock, hurting all of the new people who come in then, and those who have been participants in the past. All the same well reasoned arguments in this thread apply to future scenarios as today.

After hearing out his concerns, and hearing the v1.0 spec’s changes to the reward structure overall, I’m inclined to support the proposal myself. Feel free to tell me why you agree or disagree on Twitter.

I asked my Twitter audience recently whether or not I should look into minting some NFTs around the pocketverse, and the majority of you think I should. As such, I’m exploring a partnership with some awesome artists from Australia who are putting together ideas for a series of art called Pokt Rockets. So far, the ideas they’ve shown me have been, in a word, pretty fucking dope. Teaser excerpt below: 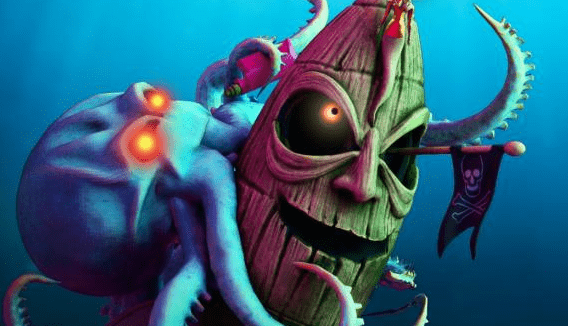 Assuming that everything goes well, I expect to have more announcements soon to come about a whole line of Rockets to show our support of the Pocket ecosystem, and as I’ve hinted in the past, I plan to throw a Poktopus themed party in St. Pete in late February/early March, which seems to me to be a good time to launch this sort of thing. Stay tuned.

In many of the more contentious debates around Pocket, I’ve seen a number of people classify the DAO as “friends and insiders”, as though the DAO is some insidious shadowy cabal of market makers manipulating the path forward behind the scenes to their own benefit. It’s yet another example of strongly held opinions by people who don’t seem to have the same amount of strongly held facts. (See also: people who don’t understand that Pocket rewards are based on relays through the network, people who think you burn your Pocket when staking it, etc.)

What’s really notable about this is that by every metric, I am a Pocket friend and insider; I’ve been friends with Michael for over five years, have advised the company since late 2017, have a significant number of nodes staked (over three digits), and hold a significant amount of the token (over seven figures).

And yet, every time there is a deeply important proposal around the Pocket ecosystem, I have consistently done three things:

People are constantly surprised when I tell them the amount of work it takes to become a DAO voter; I did it in about four months on a constant grind. The dedication and commitment shown by people who have achieved a DAO vote make them ideal representatives of the community, and I’m proud to be part of a governance organization that takes its responsibilities as seriously as we do.

If you think the DAO is some insider’s circle, there is a clear path to fix that. Put up or shut up. Become a DAO voter yourself.

There are a number of paths available, which means everyone has a reasonable path to achieve voting status, even if you’re not a noderunner or developer. But if you simply want to complain about DAO decisions without doing the work we have to be the ones making those decisions, then I’ll give your opinion the weight it deserves, which is to say, none.

That’s all for this week. See you all on Twitter.