Here’s a little crazy nugget for those of you who have been following this blog from the beginning: we’re now at the point where we’re completely nonchalant about the fact that we noderunners are serving up over a billion relays a week. Stop for a second and think about the entire last year, and consider that fact. And while you’re doing that, check out our performance for the last week:

Yeah. Almost 1.5BN relays with a 7 day daily high of 216MM. It seemed like a crazy target four months ago to hit a billion relays a day, but now that we’re at this point, it doesn’t seem like that much of a leap. What’s really been interesting, however, is the market action now that some of the crypto influencers on Twitter are starting to write about it:

As we grow in this multi-chain world, there are many other services that are popping up to help service devs on other chains. This is the lane that I think is going to accelerate the most in 2022. What initially brought this to my attention, and is one of my favorite plays for the year is Pocket Network. The only reason I even knew about this team is because they helped solve part of Harmony’s RPC issues, which is the home to Defi Kingdoms. I had no idea what POKT was prior to this development, but their infrastructure improved my personal experience tenfold when previously the lack of RPCs for the Harmony network was a huge bottleneck for users. Pocket Network connects developers and node providers, similar to Infura, but their economic structure is much more focused on remaining as decentralized as possible, and incentivizing full node users by paying them as developers use this service.

The flood of new folks being introduced to Pocket has created a significant amount of buy pressure in the OTC desks, with supply struggling to meet demand, and pricing rocketing up to match:

At the time of publishing here, the desks were showing an average of over 1.50/pokt with asks laddering up to 2, and a million plus in volume on each of the desks. The supporting communities have shouldered a rush of new members, with hundreds joining over the last couple of days.

One of the biggest beneficiaries of the flood of new interest has been the poktpool, a fractional staking pool I help Tracie Myers and Joey Rosati manage. Several hundred members joined in the last few days, adding to a collective total stake that has reached over a hundred nodes: 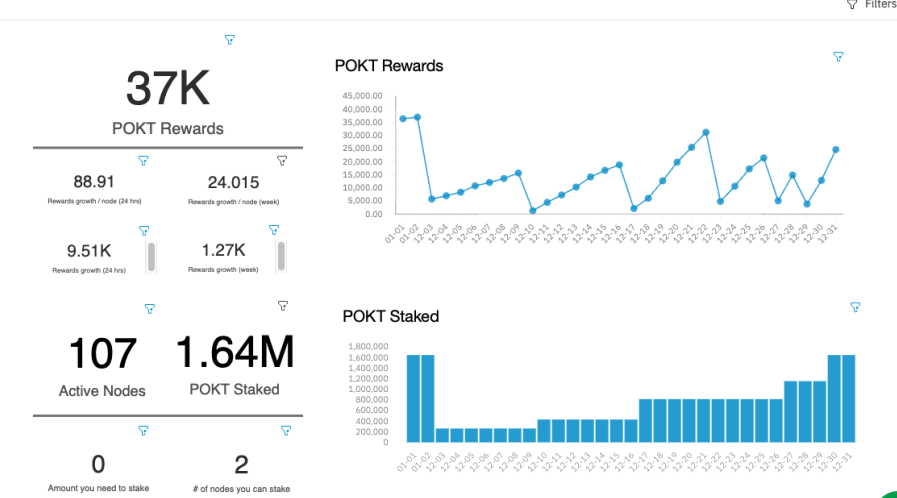 With rising $POKT prices making node staking more expensive, fractionally staking in the poktpool has become the easy way to put your tokens to work without needing a minimum full node stake.

Given the holiday break, not a lot happened with governance the last two weeks, although the conversation on the PUP-11: WAGMI Inflation proposal has been going strong. I wrote about this in Issue 5, and I believe it’s become the highest commented proposal in the history of the DAO. Given that inflationary effects are a primary driver of the growth of the network and token value, it’s no surprise that this one is so hotly debated.

A number of folks had noted that with the sunset of support, the Sandwalker rewards tracking tool had begun to error out, and stopped providing new data. An informal community hackathon sprang up around forking the original source code to restore service, and as of the last check-in, two different clones were syncing the history of the blockchain. Stay tuned for announcements on when that service comes back online.

The core team dropped the mother of all teasers on their Twitter this week:

The team is being exceedingly tight lipped about the details of the announcement, but the rumor mill is working overtime in the community channels. The three most popular theories being floated are:

What do you think? Tweet your theories to @thepoktopus

Speaking of the wPOKT launch, this week’s devlog provided some encouraging updates:

The contract for the second penetration test has been signed. Packet Labs will perform an external application security testing of the complete web application, beginning in the first week of January. Once this process is completed, we will share a report of the results.

They also noted that the application period for wPOKT beta testing has closed, with more than double the applications required, and they’ll send out instructions on next steps to those selected. 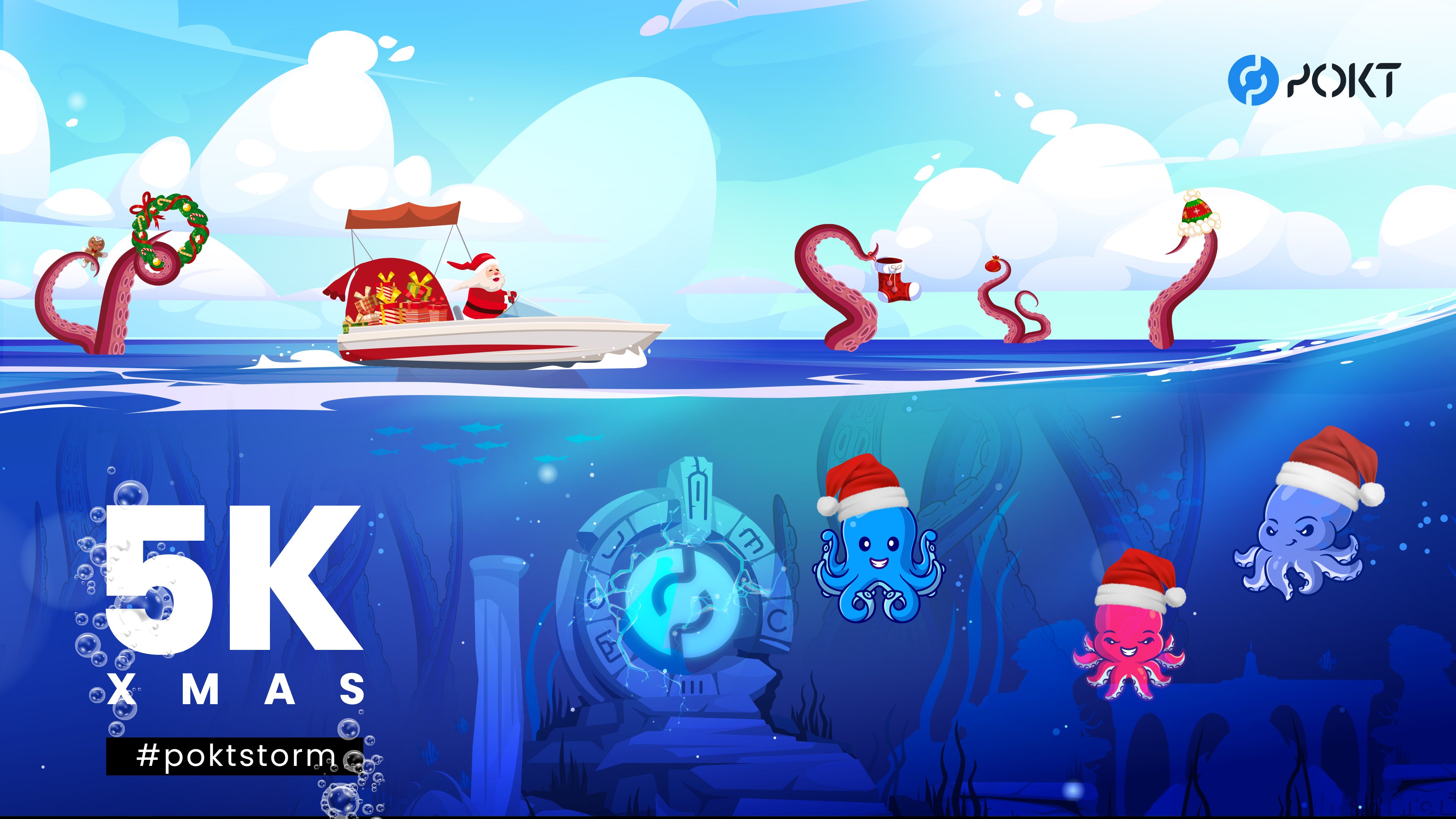 The skies were dark with $POKT raining down twice over the holiday break, including the single largest giveaway to date: 5K in poktpool stake to a single recipient for xmas. To say that Joel was pleasantly surprised would be an understatement:

I wanna give a shot out to @LeaksBlockchain for turning me on to POKT. This is life changing, thank you @thepoktopus for your generosity and enthusiasm for the project! $POKT Let’s go! 🚀

We’ll be dropping a fresh #POKTSTORM this week, so stay tuned on Twitter, and make sure your notifications are on for @thepoktopus.

The Pocket Network team was surprised yesterday morning by the announcement that a so-called “market maker” exchange had listed $POKT, especially when some proper due diligence revealed that the exchange wallet only contained 30K tokens while “trading” hundreds of thousands. A cursory overview of their trade book showed what appears to be bot driven wash trading at unusually high spreads and prices wildly disconnected from the actual trading value. Many folks were tempted by pricing that appeared to be deeply discounted from current OTC levels, but also noted the lack of support for withdrawing any tokens purchased, utterly defeating the primary reason (and best possible strategy) for having $POKT to begin with: staking it.

This set off warning bells for me, having gone through something similar with my Nano back when it was still called raiBlocks:

Some of y'all letting FOMO cloud your brain. I was guilty of it before too. Ask me how I lost my raiBlocks.

If it's not on the community vetted market list, they're not legit, period. https://t.co/2uwyxASujy

While it’s certainly possible that this exchange will eventually reach the level of liquidity required to pay off all the bets made on it, in its current state, it’s risking your actual money on a shot at a 25% discount on a platform that could have your token locked for months, when it could be earning as much as 200% APR if you’d been staked during that time. There’s a word for that kind of play: stupid.

There’s a reason that Pocket has a published list of community vetted secondary markets: people get ripped off in the crypto world all the time, and scams are prevalent. By using the approved secondary marketplaces, you have the assurance and trust of the community behind you. When you don’t, well, you don’t.

Some of the folks shilling the exchange on Twitter seemed to take a little offense to me pointing these things out, but the fact is, part of what makes Pocket so great is the strength of the community, and the fact that we support and defend each other from crypto shenanigans. This is not a degenerate pump and dump community; we don’t encourage risky behavior, we do encourage deep due diligence, and we know that letting the token be treated like a shitcoin works against the fundamental strengths of the product itself.

While I am not a financial advisor of any sort, my strong opinion is that you would be better off burning your money in your backyard than aping into high risk exchanges completely unaffiliated with Pocket, and lacking the liquidity to cover their trades. A healthy amount of greed can drive a healthy amount of financial risk taking, but an unhealthy amount of greed drives stupid behavior. While high risk speculators may be fine paper trading futures, that kind of marketplace can eat retail investors alive. Caveat emptor.

That’s all for this week. Stay safe out there, and I’ll see you on Twitter.