As even the shoeshine boy now knows, the largest single implosion of an exchange happened in spectacular fashion this week, as FTX proved to be insolvent to the tune of a 9 to 1 ratio on liabilities to assets. The contagion is still working its way through the space at the time of publishing, with other notables such as BlockFi being drawn into the after effects. I’ll leave the prurient speculation about meth fueled sex cults to others, but the fact that this kind of thing can still happen in crypto in 2022 shows that we have a long way to go in this space towards achieving the long term credibility needed to become a de facto connected layer in tech. But, it’s important to remember that CEX shenanigans are not our industry; they’re a byproduct of what we do. Our core mission has nothing to do with centralized exchanges at all:

Web3 is not about FTX. It's not about SBF. It's not about blowouts and liquidations as a bear market clears the table. It's natural to fixate on the debacles, but it's far more productive to focus on our mission.

As painful as it is to see so many user assets wiped out by mismanagement and scams, these kinds of instances shine a brilliant spotlight on the need for the kinds of protective frameworks that crypto can be really good at. One such solution is “proof of reserve”, a concept that Nic Carter writes about here:

Proof of Reserves is the idea that custodial businesses holding cryptocurrency should create public facing attestations as to their reserves, matched up with a proof of user balances (liabilities). The equation is simple (in theory):

Proof of Reserves + Proof of Liability = Proof of Solvency

The idea is to prove to the general public, and in particular your depositors, that your cryptocurrency held on deposit matches up with user balances. Of course, in practice, this isn’t quite so simple. Proving that you control some funds on chain is trivial, but you could always borrow those funds on a short term basis. This is why point-in-time attestations mean relatively little. And additionally, exchanges can have hidden liabilities or have creditors claim seniority to depositors, especially if they don’t legally segregate client assets on the platform. This is why policy like Wyoming’s SPDI law clarifying the legal status of depositors relative to custodial institutions is so important.

I encourage you to read the whole piece, and the associated resources. This is a great example of how on-chain transparency can help prevent future SBF’s from destroying so many lives.

The GRIP (Group to Review and Improve Proposals) proposal is up for debate in the governance forums, and it’s a proposal I support. The DAO proposal process has proven challenging for a number of less established folks in our ecosystem, and if we’re going to scale governance up effectively, I believe we need mechanisms which ease the onboarding process. The summary:

TL;DR: PEP-45 proposes creation of a team (GRIP) to help contributors develop proposals. The team will comprise specialists (technical and economic), an editor and a graphic artist.

Once a proposal has received community feedback in the soon-to-be-created Pre-Proposal Forum category, if needed, the specialists would do a final review.

If needed, the editor will work with the specialists to create a lay-friendly version. The graphic artist will add infographics as required. Just before a proposal launches, the editor will fix typos, spelling and grammar. At the same time, and if the proposer requests, the editor can provide writing assistance.

This proposal is for implementation on a three-month trial basis. After that, the team would report on its contribution and the community would gauge its value. A follow-up proposal, tweaked to reflect lessons learned and community input, would then be floated for open-ended adoption of GRIP. GRIP would continue to operate pending the follow-up vote.

There are a number of comments both in favor and against, but I think the concerns can be reasonably mitigated with structure. Head over there and drop your opinion.

Pocket is nearing a new milestone in the network, as we get within striking distance of a billion tokens staked: 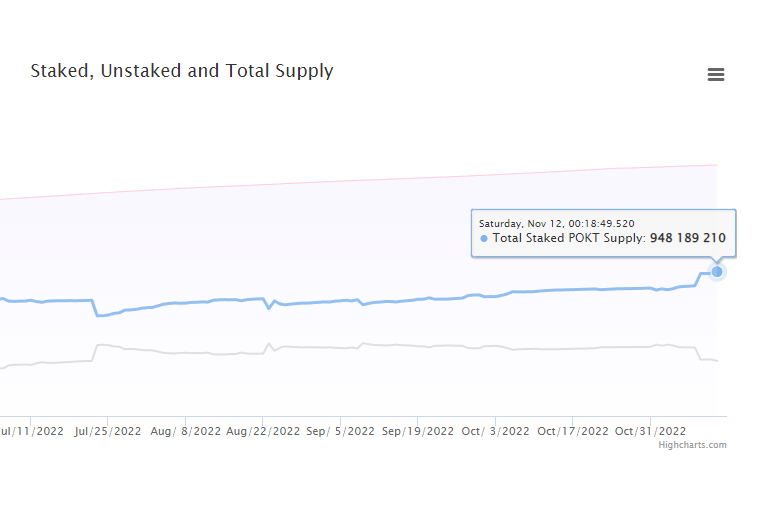 BlockDaemon was announced as a new institutional staking partner in October, with other institutional partnerships inbound. I’ll be on the watch to see that total staked number break 10 figures.

A number of core team and contributors will be in town this week for a Tampa Takeover and general state of the network meetup. While the entire gamut of topics will be discussed, I’m mostly focused on the marketing strategy. Pocket is still not widely known enough in the web3 space, and educating the demand side of the marketplace is a critical priority. One of the things that I think is a critical need in the community is a greater focus on builders who want to use Pokt. I’ll be talking about that more this week, along with some updates on Twitter after the SOTU.

19:3 Eating Your Own Dogfood

As part of their strategy to dogfood nodes and help secure the network, along with accelerating consensus time on the backside of upgrades, Pocket Network has begun moving forward on their noderunning strategy. For the first time since mainnet, PNI is deploying both validator and service nodes on the network to collect data in real time, and help with faster recovery after an incident on the network.

The team plans to deploy in three regions, and run both the top 10 and 5 newest chains on the network in order to bootstrap relay supply. They’re also going to deploy 200 validators, representing a fifth of the total validator pool, stake at 100K pokt each. They’re running a pooled setup, with a target of operating around 1100-1400 total nodes at around 87MM total POKT staked.

I’m looking forward to seeing the improvements in the total network by the team’s active participation.

One of the shittiest things about being a notable voice in a community is that when markets are down and people are under pressure, you’re a convenient target to take their stress out on. I have mad respect for folks like ChainLinkGod who have weathered multiple rounds of ups and downs, and all of the FUD that comes along with that.

It’s remarkably easy to take shots at those leading the way when you haven’t been there for the five years it took to build from a vague idea about the future of web3 into the billion relay per day juggernaut it is now. And when people are under pressure, ugliness comes out. I’ve seen the stress in my community and others result in some really toxic conversations where folks are trying to tear each other down instead of aligning their energy for the good of the community, and the project as a whole.

I’ve lived through four bear markets in my time, from the dot com bust through now. The patterns start to look the same after a while, both from a financial arc perspective to the community sentiment perspective. The pressure that comes with significant loss of net worth is not to be understated. When you’re calculating your personal runway, and your paper losses, it’s hard as hell to be all hoo rah and yippy yay.

However, these markets are where fortunes are made, and sometimes your only tactic is to live through them as gracefully as you can.

Pocket has a singular vision of the future: to be the TCP/IP of the blockchain space, the default transport layer for a decentralized multichain future. It was born in a bear, and is now going through its next transformation in a bear. Aligning our efforts to support the cause is the absolute best use of our energy.